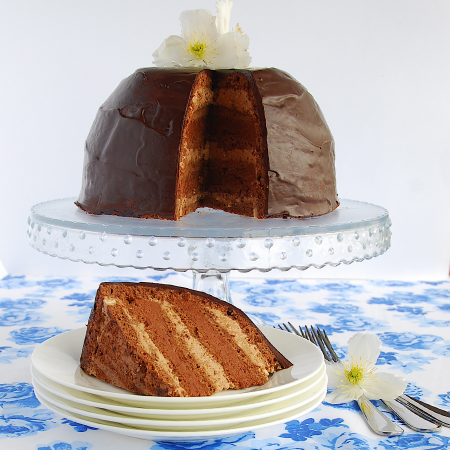 It was Ps birthday and the conversation went a bit like this ,”what kind of cake would you like for your birthday hon”, quickly followed by “but not one I’ve already made before”, which I’m sure all Bloggers can understand, you can’t repeat the same blog twice can you. “But I really would like that big layer cake you made the other week”, he was refering to the Dobos Torte from the Daring Bakes Challenge which he ate most of. “Ah but I have already posted that one on my Blog, I need something new”. Ps response was a big sigh, “but that’s the one I fancied”. “You can have anything, absolutely anything else you have ever seen in a cake shop, a restaurant or on the net…how exciting is that”? “Hmmm”, was his reply, “Ok how about one of those cakes we saw at the Hospitality Show then” …oh..oh now I know something big was coming because all the cakes on display were from the trades show competitions. “Which was that dear?”  “The dome shaped one with all the different chocolate layers, you said you’d make one one day”. Hmm, I must have conveniently forgotten but I suppose it karma for not letting P have his first choice. So that is how Ps birthday cake was born, that and his love for malt whiskey from Islay. Just don’t tell him how much of his single malt I used in the cake, we dragged it half was across the world from Islay but I don’t think his intention was for it to go into a cake! It did taste divine though and he really enjoyed it and said it was better than the Dobos Torte.

Ingredients – Sponge (can be made a day ahead)

Before you make your mousse you need to cut your sponge to fit the bowl, the mousse will set quickly so you need to be ready to layer and assemble quickly. The cake is made up of layers of sponge and mousse which is all sealed with a sponge ‘jacket’.

Line the bowl with cling film (which will help remove it from the bowl once set). Cut a strip of sponge to fit the bottom of the bowl. Cut more strips and shape them to fit the sides of the bowl, trying to avoid any gaps. Cut 5 circles of various sizes to fit inside the bowl starting from the smallest that will sit close to the base to the largest which will be the last layer. If you don’t have enough full circles you can make a layer up by piecing a few left over strips together (it won’t be seen anyway).