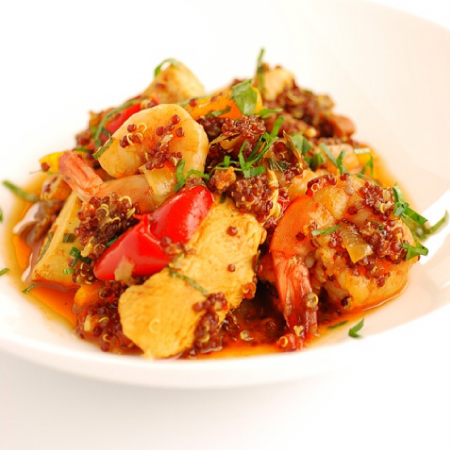 The first bag of quinoa I had in the cupboard was almost up to it’s expiry before I got around to using it but once I got into the swing I was pretty well hooked. I love the texture and the nutty flavour it offers a dish, it’s perfect for warm salads and works perfectly as an alternative to rice in Jambalaya. I’d seen the recipe on a product advertisement for Ceres Quinoa and decided to try it. I have changed the method slightly and added a few more ingredients like paprika and tumeric which I associate with Paella. I found that rather than cook it all in one pot which is typical for Jambalaya the quinoa is better cooked on it’s own to help it ‘sprout’ then added to the rest of the dish for the final stages of cooking.

Creole Jambalaya originates from the French Quarter of New Orleans. It evolved by the Spanish attempting to make paella in the New World, where saffron was not readily available due to import costs and tomatoes became the substitute for saffron. As time went on, French influence became strong in New Orleans, and spices from the Caribbean changed this New World paella into a unique dish.

It does re-heat well if you want to make it in advance, the quinoa holds better and doesn’t absorb all the liquid liek rice would.

Tapas – Make and enjoy a range of Tapas

Creative Salads – How about a Moroccan Quinoa Salad? Or Mediterranean Lentil Salad?

Chocolate & Plain Croissant – Ever wanted to make your own croissants?